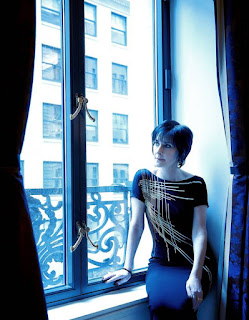 Un nuovo articolo-intervista sulla cantante pubblicato ieri sull'edizione online del The Wall Street Journal.
Ireland’s Enya on How Life by the Sea Influenced Her Music
One of the Emerald Isle’s best-known singers recalls her Celtic upbringing in coastal Gaoth Dobhair
Irish singer-songwriter Enya Brennan, 54, known professionally as Enya, is one of the world’s best-selling recording artists and has won four Grammy Awards. Her latest album is “Dark Sky Island” (Reprise). She spoke with Marc Myers.
The sea has been in my heart since I was a little girl. I grew up in Gaoth Dobhair, an Irish-speaking parish on the Atlantic coast of County Donegal, in the northwest corner of Ireland. The area is known for its rugged cliffs and windswept beaches, and the sea’s moods and spirit still find their way into my music.
When I was little, Gaoth Dobhair was a rural area and fairly secluded from the rest of Ireland. It’s still pretty much that way today. It’s the largest Gaelic-speaking parish in Ireland. When I was 4, I attended primary school to learn English.
The parish of Gaoth Dobhair is still quite picturesque. The most recognizable feature is Mount Errigal, which is surrounded by deep glens and lakes. There are six small islands off the coastline, including Gola and Tory, and I’d often take mountain walks and look out at them. We had quite a bit of rain throughout the year, but the rain never bothered me.
The house I grew up in was on my grandparents’ property, behind their house. Ours was built in the 1950s and wasn’t very big. We had a girls’ room and a boys’ room for nine children. I was the sixth, with four brothers and four sisters.
School was an extension of my home life. My grandfather, Hughie Duggan, was the schoolmaster and my grandmother, Mary Duggan, was the head teacher at the primary school. My grandfather was a great storyteller. Before I attended school, I’d wait for him to arrive home each afternoon hoping he’d tell me a story. Halfway through he’d stop and say, “Tomorrow, we’ll continue.” It was all so dramatic.
Music was big in our household. My father, Leo, was the leader of a dance band, and my mother, Maire, was a music teacher and a pianist in his band. They toured a great deal, mostly in Ireland and Scotland. When they did, my grandmother and my mother’s sister took care of us. Naturally, we were spoiled.
By the time I was 4, I was eager to learn to play the piano. I loved melody, and the piano fascinated me. As a child, music unlocked my imagination, and today I still find music very visual. When I write, it’s like a journey. I never know where I’m going to go. It’s only at the end that I become aware of the song’s main inspiration.
When I was 5, I began entering singing competitions. The first time I sang was at the local theater. You had to perform two songs, starting with a slow one and finishing with a fast one. They were songs we were taught in primary school. During the concert, my mother was seated at the piano in front of the stage and provided contestants with their starting notes. When it was my turn, I mistakenly began with the fast song. I didn’t realize my error until I saw my mother’s frown. I stopped singing and covered my mouth. There was silence, followed by laughter.
My mother quickly played the starting note again and I sang the right song. When I finished, there was a pause and I sang the fast song again. I won the contest. I was determined to get it right, and the audience’s laughter didn’t deter me.
Being a middle child wasn’t difficult. Middle children aren’t usually asked tough questions by adults. Those go to the older ones. So I ended up listening more than talking at home. It wasn’t until I was 11, when I went away to boarding school at Loreto College in Milford in County Donegal, that I began to hear the sound of my voice and actually enjoyed it.
After boarding school, I joined Clannad, a folk group that included three of my older siblings and two uncles. Nicky and Roma Ryan were managing the group at the time. Nicky felt the group needed a new musical element and suggested I join. I toured with them for two years. Then I left to explore a new musical approach with Nicky and Roma.
Soon after I left Clannad, I started writing what was described as “instrumental music” and “visual pieces,” a style I continue to write in today. In 1986, I was signed to Warner Music.
Today I divide my time between two homes—one near Dublin overlooking the Irish Sea and the other on the Mediterranean Sea in the south of France. Near Dublin, I live in a Victorian castle that was built in 1840. When I bought it in 1997, there was a lot of work to be done. It took two years to restore it to its charming original state. I also put in large windows to view the sea.
At my castle, I take long walks. I have to say, one of my favorite views is the moon reflecting on the water at night. It’s spectacular. All that silent glittering on the water, it’s like looking at a secret.
Articolo di Marc Mayers
Foto di Brad Trent
Link diretto: Ireland’s Enya on How Life by the Sea Influenced Her Music
Fonte: The Wall Street Journal