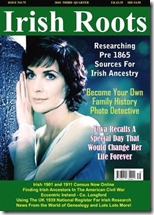 It was a hot and sultry summers day when I stepped down from the bus which had taken me from Milford Loretto College to my home in Ghaodobhair, County Donegal. I had just turned seventeen and It was the last time I would make this journey. My Suitcase in hand and a bag over my shoulder, my College days were over. There was no big fuss for this homecoming girl but after all there were nine of us with all of the trappings that such a big family commands. I was just happy to be home. It was the time of day that my Dad was in Meenaleck tending to the Pub (Leo’s Tavern) and Mum was tutoring her Church choir.
My grandfather Aodh O Dugain, was the headmaster of the local Primary School in Dore where my Grandmother also taught. ‘’Gog’’, as we called him, was also a founder of Aisteoiri Ghaodobhair, the ‘Gweedore Theatre company’. Every time I returned home I always made a point of reporting to ‘Gog’ not only out of respect , but because he always took a very serious interest in how I had progressed and, after all, he had paid my way in College. ‘’I’ll see him tomorrow ‘’I thought, ‘’ but first I’ll catch up with the girls’’.
Not much had changed. My grandmother was gently scolding my siblings for making too much noise and at the same time she waved a big warm welcome at me. The family dog ran to greet me and made a nice mess of my skirt with his big friendly paws, but it was lovely to see him and to be welcomed home, besides, my school uniform would no longer be needed now. I found myself caught up in the general excitement but very soon I felt the need for some quiet. I had gotten used to the peace and quiet of College so I sneaked off to see how the new litter of kittens were doing. ‘Peewee’ and her kittens had made their home in our disused ‘bunkhouse’. I sat among them and watched them play. The sun beat down, the odd car would whoosh by and eventually the noise just faded away and I was left to relax with the mewing of the kittens and the buzzing of bees as my thoughts drifted to what the future might hold for me. As far as I was concerned Music would be my future, absolutely nothing else would do, but how that would come about I just had no idea. Even in the disused bunkhouse I was surrounded by real and vivid reminders of the musical heritage of my family.
There was a full kit of Premier drums showing the wear and tear of many years on the road. My grandmother, ‘Minna’ on my father’s side, had played those drums, and my grandfather Harry, played piano. He had a heart attack while performing one night and was taken to hospital. He insisted that the Band continued with the gig. Sadly he died that very night. Sometime later my mother joined the band and she too played piano and sang. A ‘Kay’ semi solid electric guitar lay against the wall, sadly waiting for someone to pick it up again. I reached out ,and in sympathy strummed it where it stood. Then there was the Selmer Saxophone, my father’s main instrument in the Band , the Accordion played by my aunt, Rosemary. My dad’s brother, affectionately known as ‘La La’, played trumpet and his other brother Tony , also on accordion. All these instruments came from my dad’s Dance Band ‘The Slieve Foy’, here in their final resting place after thousands of miles on the road and hundreds of Ballrooms all over Ireland and Scotland.
Taking up the baton from my father and mother, my two brothers and eldest sister formed the group Clannad along with my two uncles Padraig and Noel.
It was unthinkable to me that anything other than music would be part of my life , I was only three when I sang at my first Feis Ceol competition. Music was never far from my mind but contrary to popular belief my ambitions were in no way connected to those of my family, as I knew I wanted to have my own career and make my own mark, but I just had no idea how to make that happen. While I pondered on the future I could not even imagine any other choice. I had taken up Classical music in Milford and joined the ‘School’ choir on the first day I arrived, even this was not my first choir. I felt so fortunate to have the opportunity to learn more about my favourite subject.
My thoughts drifted to Sister Evelyn, my Music tutor, a meticulous and dedicated lady, and so generous in the way she imparted her great knowledge of music to me, but now the future lay before me, my thoughts were in full flight when suddenly, my cosy daydreaming was rudely interrupted as one of my sisters called my name ‘’Enya, it’s Nicky Ryan on the phone, he wants to speak to you’’... and so the future began.