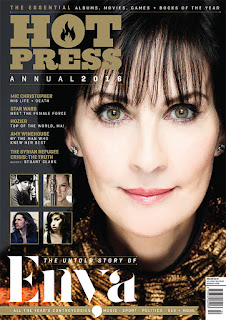 Hot Press, la rivista  nata in Irlanda e specializzata in musica e politica, ha dedicato la copertina del 2016 ad Enya, ma non solo; sul sito infatti è presente un estratto dell'articolo The Untold Story of Enya presente all'interno della copia cartacea (e digitale) della rivista. Nell'estratto si parla di un concerto al Metropolitan di New York, da trasmettere in tutto il mondo, e di registrare i brani più celebri della cantante irlandese negli studi londinesi di Abbey Road. Notizia questa già nota nel maggio del 2011, quando Nicky Ryan rilasciò un'intervista dove si paventava tale possibilità. Sarà la volta buona?
Enya: Plan To Record The Hits Live Revealed
Live gigs are being considered by the Enya triumvirate – with live in-studio recordings of the big tracks from her back catalogue providing a potential starting point...
Enya has revealed to Hot Press that she is considering the possibility of doing live gigs. But the likelihood is that the potential live show will be tested and developed via a live in-studio recording, with long-time producer Nicky Ryan in charge of proceedings.
“We talked about using The Metropolitan in New York to just even one concert that can be screened all over the world,” Enya reveals. “But to hear it first is the most important thing: to hear ‘Orinoco Flow’ or ‘Caribbean Blue’ as they would sound live. We’ve done some really great TV shows for Japan and you have the string sections - ten cellos and twenty violins - playing the music and you hear all the parts and the choir. It’s time to experiment with getting the sound on stage.”
While nothing is yet written in stone, there’s also talk of ensconcing themselves in the world’s most famous studio.
“Nicky has this idea of recording all the hits live,” Enya reveals. “He’s a big Beatles fan, so he’d love to do it in Abbey Road.”
The bumper 2016 Hot Press Annual has Enya – who was christened Eithne Ní Bhraonáin – on the cover. The interview, conducted by Hot Press editor Niall Stokes, delves deep into the enigmatic Irish star’s creative process.
Enya says she didn’t properly know where her new Dark Sky Island album was taking her until the conclusion of the sessions.
“It’s only when you finish the eleven songs - the eleven stories and what they are saying - that you know,” she reflects. “You understand how I work with Nicky Ryan. I write a song. We work on it for a while and then we leave it. You mightn’t go back to that song for three months or six months. When you go back, that’s where you try and see what the emotional feeling was, what was in the melody?”
Noting that, “It’s really important to live your life right now; you never know what tomorrow will bring”, Enya says she’s keener than ever to perform her first solo gigs.
The article, which runs over six pages of the Annual, offers unique new insights into Enya’s development – and also reveals the origin of the star’s name. Nicky Ryan recalls that he was concerned that the world might have difficulty knowing how to pronounce the name Eithne.
“I came up with the idea of a phonetic spelling,” he reveals. “E-N-Y-A. How much easier is that to understand and to pronounce? It was something that I felt we had to do, but it made sense in every way.”
The in-depth interview is available only in the 2016 Hot Press Annual.